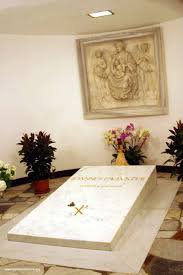 On 31 March 2005, following a urinary tract infection, he developed septic shock, a form of infection with a high fever and low blood pressure, but was not hospitalised. Instead, he was monitored by a team of consultants at his private residence. This was taken as an indication by the pope, and those close to him, that he was nearing death; it would have been in accordance with his wishes to die in the Vatican.Later that day, Vatican sources announced that John Paul II had been given the Anointing of the Sick by his friend and secretary Stanisław Dziwisz. The day before his death, one of his closest personal friends, Anna-Teresa Tymieniecka visited him at his bedside. During the final days of the pope’s life, the lights were kept burning through the night where he lay in the Papal apartment on the top floor of the Apostolic Palace. Tens of thousands of people assembled and held vigil in St. Peter’s Square and the surrounding streets for two days. Upon hearing of this, the dying pope was said to have stated: “I have searched for you, and now you have come to me, and I thank you.”

On Saturday, 2 April 2005, at approximately 15:30 CEST, John Paul II spoke his final words in Polish, “Pozwólcie mi odejść do domu Ojca” (“Allow me to depart to the house of the Father”), to his aides, and fell into a coma about four hours later. The Mass of the vigil of the Second Sunday of Easter commemorating the canonisation of Saint Maria Faustina on 30 April 2000, had just been celebrated at his bedside, presided over by Stanisław Dziwisz and two Polish associates. Present at the bedside was a cardinal from Ukraine, who served as a priest with John Paul in Poland, along with Polish nuns of the Congregation of the Sisters Servants of the Most Sacred Heart of Jesus, who ran the papal household. Pope John Paul II died in his private apartment at 21:37 CEST (19:37 UTC) of heart failure from profound hypotension and complete circulatory collapse from septic shock, 46 days before his 85th birthday. His death was verified when an electrocardiogram that ran for 20 minutes showed a flatline. He had no close family by the time of his death; his feelings are reflected in his words written in 2000 at the end of his Last Will and Testament.Stanisław Dziwisz later said he had not burned the pontiff’s personal notes despite the request being part of the will.