Carole Landis (born Frances Lillian Mary Ridste; January 1, 1919 – July 5, 1948) was an American actress and singer. She worked as a contract-player for Twentieth Century-Fox in the 1940s. Her breakthrough role was as the female lead in the 1940 film One Million B.C., with United Artists. Landis was known as “The Ping Girl” and “The Chest” because of her curvy figure. 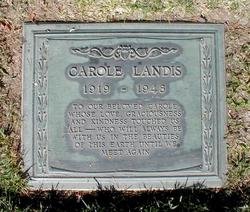 DEATH: Landis was reportedly crushed when Harrison refused to divorce his wife for her; unable to cope any longer, she committed suicide in her Pacific Palisades home at 1465 Capri Drive by taking an overdose of Seconal. Harrison was the last person to see her alive, having had dinner with Landis the night before she committed suicide.