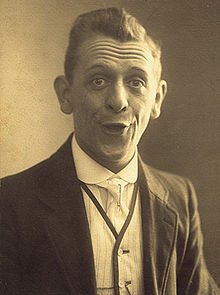 Grock (January 10, 1880 – July 14, 1959), born Charles Adrien Wettach, was a Swiss clown, composer and musician. Called “the king of clowns” and “the greatest of Europe’s clowns”, Grock was once the most highly paid entertainer in the world.

DEATH: By 1913, Grock’s fame had spread, his act having developed into the mixture of pantomime and musical blunders for which he is now remembered.With the outbreak of World War I, he made Britain his base, remaining there until 1924, when he returned to continental Europe. He performed throughout Europe and in the United States, commanding ever higher fees, and his continuing success enabled him to establish his own circus in 1951, with which he toured until his final performance in Hamburg on October 30, 1954.