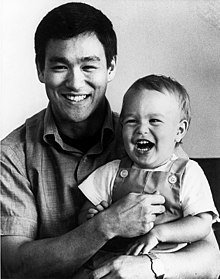 Lee Jun-fan (November 27, 1940 – July 20, 1973), known professionally as Bruce Lee, was a Hong Kong-American actor, director, martial artist, martial arts instructor, and philosopher. He was the founder of the hybrid martial arts Jeet Kune Do. Lee was the son of Cantonese opera star Lee Hoi-chuen. He is considered by commentators, critics, media, and other martial artists to be the most influential martial artist and a pop culture icon of the 20th century, who bridged the gap between East and West. He is often credited with helping to change the way Asians were presented in American films.

DEATH: Later, Lee complained of a headache, and Ting gave him the painkiller Equagesic, which contained both aspirin and the tranquilizer meprobamate. Around 7:30 p.m., he went to lie down for a nap. When Lee did not come for dinner, Chow came to the apartment, but he was unable to wake Lee up. A doctor was summoned, and spent ten minutes attempting to revive Lee before sending him by ambulance to Queen Elizabeth Hospital. Lee was declared dead on arrival, at the age of 32.

Lee’s wife Linda returned to her hometown of Seattle, and had Lee’s body buried in Lake View Cemetery in Seattle. Pallbearers at Lee’s funeral on July 25, 1973, included Taky Kimura, Steve McQueen, James Coburn, Chuck Norris, George Lazenby, Dan Inosanto, Peter Chin, and Lee’s brother Robert.Around the time of Lee’s death, numerous rumors appeared in the media. Lee’s iconic status and untimely death fed many wild rumors and theories. These included murder involving the triads and a supposed curse on him and his family.