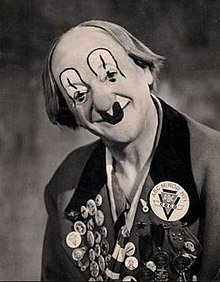 Nicolai Poliakoff OBE (2 October 1900 – 25 September 1974) (Latvian: Nikolajs Poļakovs) (Russian: Nikolai Petrovich Polyakov) was the creator of Coco the Clown, arguably the most famous clown in the UK during the middle decades of the 20th century. Technically, Coco is an Auguste, the foolish character who is always on the receiving end of buckets of water and custard pies. The auguste often works with the more clever white-faced clown, who always gets the better of him.

DEATH: Poliakoff died in Peterborough Hospital on 25 September 1974, after a short illness, and was buried in Woodnewton, in Northamptonshire, England. His eldest son, Michael, a longtime circus “Producing Clown”, creator of a much imitated “soap gag” entree, and the Clown who designed the post 1960’s Ronald McDonald, was by then already using the “Coco” moniker. Michael had made his debut in the ring at 17, as “Coconut” and his sister Helen as “Cocotina” (‘cocos’ being the Spanish word for grinning face and applied to the coconut because of the three marks on its shell). Michael’s Coco the Clown was inducted into the International Clown Hall of Fame in 1991.