Jack Roosevelt Robinson (January 31, 1919 – October 24, 1972) was an American professional baseball player who became the first African American to play in Major League Baseball (MLB) in the modern era. Robinson broke the baseball color line when the Brooklyn Dodgers started him at first base on April 15, 1947. When the Dodgers signed Robinson, they heralded the end of racial segregationin professional baseball that had relegated black players to the Negro leagues since the 1880s.Robinson was inducted into the Baseball Hall of Fame in 1962. 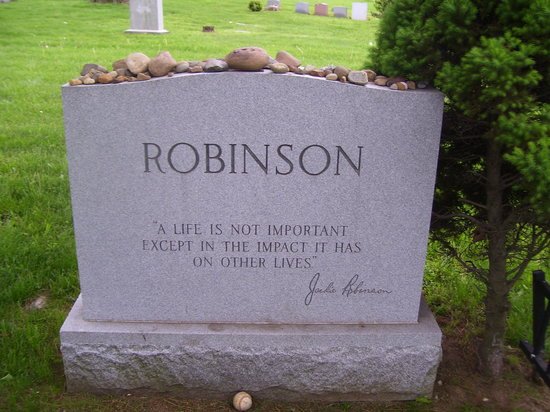 DEATH: Complications from heart disease and diabetes weakened Robinson and made him almost blind by middle age. On October 24, 1972, Robinson died of a heart attack at his home on 95 Cascade Road in North Stamford, Connecticut; he was 53 years old. Robinson’s funeral service on October 27, 1972, at Upper Manhattan’s Riverside Church in Morningside Heights, attracted 2,500 mourners. Many of his former teammates and other famous baseball players served as pallbearers, and the Rev. Jesse Jackson gave the eulogy. Tens of thousands of people lined the subsequent procession route to Robinson’s interment site at Cypress Hills Cemetery in Brooklyn, New York, where he was buried next to his son Jackie and mother-in-law Zellee Isum. Twenty-five years after Robinson’s death, the Interboro Parkway was renamed the Jackie Robinson Parkway in his memory. This parkway bisects the cemetery in close proximity to Robinson’s gravesite.