Ronald Belford “Bon” Scott (9 July 1946 – 19 February 1980) was an Australian singer, songwriter and instrumentalist, best known for being the lead vocalist and lyricist of the Australian hard rock band AC/DC from 1974 until his death in 1980. 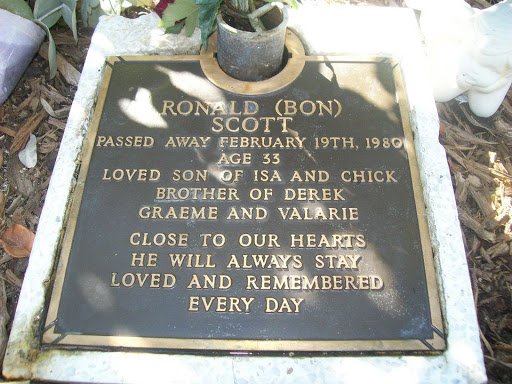 DEATH: On 15 February 1980, Scott attended a session where Malcolm and Angus Young were working on the beginnings of two songs that would later be recorded on the Back in Black album; “Have a Drink On Me” and “Let Me Put My Love Into You” with Scott accompanying on drums rather than singing or writing lyrics.
Days earlier, Scott had gone with Mick Cocks to visit their friends the French group Trust in the Scorpio Sound studio in London where they recorded the album Répression; Scott was working on the English adaptation of texts by Bernie Bonvoisin for the English version of the album. During this visit, the musicians did a jam session of “Ride On”. This improvised session was Scott’s last recording.
Some time during the late evening of 18 February and early morning of 19 February, Scott passed out and died at the age of 33. He had just visited a London club called the Music Machine (currently known as KOKO). He was left to sleep in a Renault 5 owned by a friend of Scott’s, Alistair Kinnear, at 67 Overhill Road in East Dulwich. Later that day, Kinnear found Scott lifeless, and alerted the authorities. Scott was taken to King’s College Hospital in Camberwell, where he was pronounced dead on arrival. The chronology of events on 19 February and when exactly Scott was found dead has been challenged by Jesse Fink’s 2017 book Bon: The Last Highway, which quotes UFOguitarist Paul Chapman as having been informed early that morning by Scott’s friend Joe Fury that Scott was dead. Kinnear said he found Scott in the evening. Chapman claims Scott and Fury were with him the previous evening of 18 February and Scott left his apartment to buy heroin, never to return.