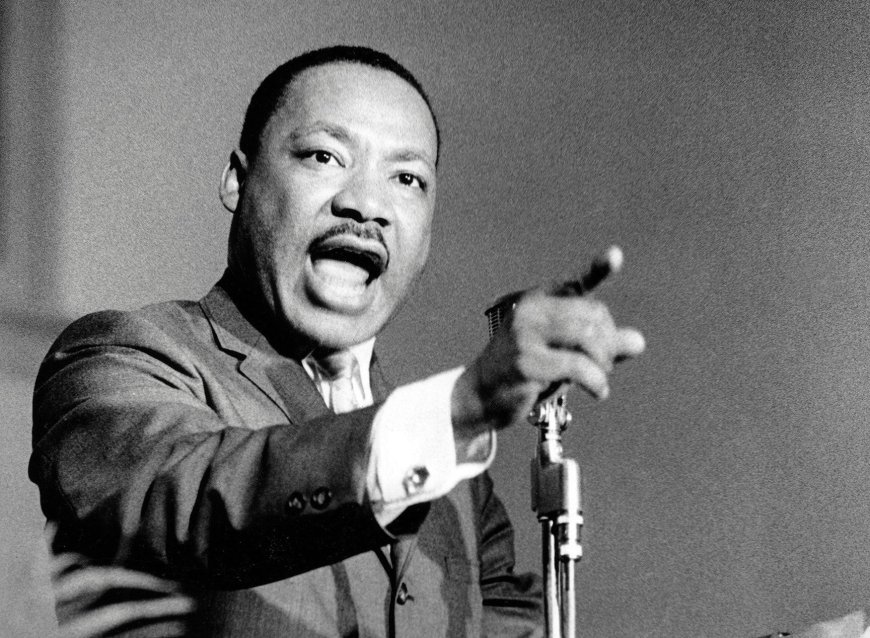 Martin Luther King Jr. (January 15, 1929 – April 4, 1968) was an American Baptist minister and activist who became the most visible spokesperson and leader in the civil rights movement from 1954 until his assassination in 1968. Born in Atlanta, King is best known for advancing civil rights through nonviolence and civil disobedience, tactics his Christian beliefs and the nonviolent activism of Mahatma Gandhi helped inspire.

King led the 1955 Montgomery bus boycott and in 1957 became the first president of the Southern Christian Leadership Conference (SCLC). With the SCLC, he led an unsuccessful 1962 struggle against segregation in Albany, Georgia, and helped organize the nonviolent 1963 protests in Birmingham, Alabama. He also helped organize the 1963 March on Washington, where he delivered his famous “I Have a Dream” speech.

On October 14, 1964, King won the Nobel Peace Prizefor combating racial inequality through nonviolent resistance. In 1965, he helped organize the Selma to Montgomery marches. The following year, he and the SCLC took the movement north to Chicago to work on segregated housing. In his final years, he expanded his focus to include opposition towards poverty and the Vietnam War. He alienated many of his liberal allies with a 1967 speech titled “Beyond Vietnam”. J. Edgar Hoover considered him a radical and made him an object of the FBI’s COINTELPROfrom 1963 on. FBI agents investigated him for possible communist ties, recorded his extramarital liaisons and reported on them to government officials, and on one occasion mailed King a threatening anonymous letter, which he interpreted as an attempt to make him commit suicide.

DEATH: On March 29, 1968, King went to Memphis, Tennessee, in support of the black sanitary public works employees, who were represented by AFSCMELocal 1733. The workers had been on strike since March 12 for higher wages and better treatment. In one incident, black street repairmen received pay for two hours when they were sent home because of bad weather, but white employees were paid for the full day.

On April 2 King led what had been a peaceful downtown march in support of the sanitation workers, until bands of teenagers began smashing random store windows, and Memphis police attacked some of the teens, and also activists with nightsticks. The activists lost control of the demonstration, called it off, and rushed King to an automobile for his own safety. Later that day, a group of teens who called themselves The Invaders, visited King’s hotel room, and confessed they had been paid by federal law enforcement officials to disrupt the march, $150 apiece.

On April 3, King addressed a rally and delivered his “I’ve Been to the Mountaintop” address at Mason Temple, the world headquarters of the Church of God in Christ. King’s flight to Memphis had been delayed by a bomb threat against his plane. In the prophetic peroration of the last speech of his life, in reference to the bomb threat, King said the following:

And then I got to Memphis. And some began to say the threats, or talk about the threats that were out. What would happen to me from some of our sick white brothers?

Well, I don’t know what will happen now. We’ve got some difficult days ahead. But it doesn’t matter with me now. Because I’ve been to the mountaintop. And I don’t mind. Like anybody, I would like to live a long life. Longevity has its place. But I’m not concerned about that now. I just want to do God’s will. And He’s allowed me to go up to the mountain. And I’ve looked over. And I’ve seen the promised land. I may not get there with you. But I want you to know tonight, that we, as a people, will get to the promised land. So I’m happy, tonight. I’m not worried about anything. I’m not fearing any man. Mine eyes have seen the glory of the coming of the Lord.

King was booked in Room 306 at the Lorraine Motel(owned by Walter Bailey) in Memphis. Abernathy, who was present at the assassination, testified to the United States House Select Committee on Assassinations that King and his entourage stayed at Room 306 so often that it was known as the “King-Abernathy suite.” According to Jesse Jackson, who was present, King’s last words on the balcony before his assassination were spoken to musician Ben Branch, who was scheduled to perform that night at an event King was attending: “Ben, make sure you play ‘Take My Hand, Precious Lord’ in the meeting tonight. Play it real pretty.”

King was fatally shot by James Earl Ray at 6:01 p.m., April 4, 1968, as he stood on the motel’s second-floor balcony. The bullet entered through his right cheek, smashing his jaw, then traveled down his spinal cord before lodging in his shoulder. Abernathy heard the shot from inside the motel room and ran to the balcony to find King on the floor. Jackson stated after the shooting that he cradled King’s head as King lay on the balcony, but this account was disputed by other colleagues of King; Jackson later changed his statement to say that he had “reached out” for King.

After emergency chest surgery, King died at St. Joseph’s Hospital at 7:05 p.m. According to biographer Taylor Branch, King’s autopsy revealed that though only 39 years old, he “had the heart of a 60 year old”, which Branch attributed to the stress of 13 years in the civil rights movement.

President Lyndon B. Johnson declared April 7 a national day of mourning for the civil rights leader. Vice President Hubert Humphrey attended King’s funeral on behalf of the President, as there were fears that Johnson’s presence might incite protests and perhaps violence. At his widow’s request, King’s last sermon at Ebenezer Baptist Church was played at the funeral, a recording of his “Drum Major” sermon, given on February 4, 1968. In that sermon, King made a request that at his funeral no mention of his awards and honors be made, but that it be said that he tried to “feed the hungry”, “clothe the naked”, “be right on the [Vietnam] war question”, and “love and serve humanity.”